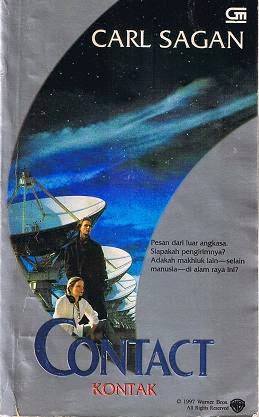 Many years ago I have watched Contact’s movie adaptation without really knowing that is was adapted from a book. Jodie Foster was the main reason we—me and my father—watched it at that time on TV. I didn’t quite remember the story, but it related with space journey and a touching reunion with Jodie’s father. However, I remember vaguely my own feeling while and after watching it. I was touched and amazed; touched by love and amazed by God’s creation. So naturally, when I finally read the book, I expected to find a deeper feeling than the movie. However, either I have a bad memory, or I have expected too much, this time I must admit that I prefer the movie than the book.

Eleanor Arroway grew up in the end of 20th century. She was a gifted child and was interested in science since childhood. Her beloved dad died, and she had trouble of accepting her step father. She had a good career as an astronomer, and in her forties, she has become a respectable scientist and Director of Project Argus, a project dedicated to “Search for Extra-Terrestrial Intelligence (SETI) in New Mexico. One day the Argus received a set of codes of prime numbers from a planet Vega which is about 26 light years away from Earth. She suspected that the much more intelligent extraterrestrial life of the planet was communicating with human being. This discovery got full attention of the President (American first female President), and as the codes were sent to the whole world, it then became a prime subject of human existence. The codes (later on became ‘the Message’) were in fact a manual to build a space ship, a technology which was still unknown to them. An international consortium was created, and the whole world focused their attention to the building and the dispatch of ‘the Machine’.

Ellie involved in the whole process, during which she had many debates and discussions with many different people. The main controversy was the eternal debate between religious and scientists. Each accused the other of being skeptical. But nevertheless, the Machine was finally ready to carry five selected scientists from five countries—Ellie was among them—to planet Vega. They went through the Galaxy and for about 24 hours each one had similar experience of meeting an extraterrestrial who took a form of someone they loved most. In Ellie’s case, she met her ‘father’. However upon returning, government officials took the journey as a hoax; the scientists way of conspiring. Because from Earth point of view, there were only 20 minutes elapsed when the Machine stopped abruptly, before the scientists finally came out of it.

If you are a scientist or a mathematician, you would probably enjoy this book, more than I did. I dislike mathematics, and was not impressed by the long explanation on the prime numbers which occasionally appeared. My interest for this book, instead, lies on the humanity aspect, especially the long debate of religious vs scientific. In my opinion, both Ellie (scientist) and Palmer Joss (religious) were too skeptical—reminded me to Pilate’s ‘what is truth?’—about the other’s subject; and too proud of themselves and of their own subjects. I am often grateful for not being born as a scientist like Ellie, who uses too much of her brain than her heart, and thinks that everything must be explained with theory. She cannot understand that we need love and affection much more than the knowledge that there are some high intelligent creatures somewhere in the galaxy. Joss was perhaps more opened to accept scientific things without compromising his faith.

In the end, Sagan portrayed how the nations and people as individual—for once—were brought to unity as they were expecting these extraterrestrial beings. According to Sagan, all human races could now regard themselves as a whole. The extraterrestrial ideas germinated the power of humanity in us; the science caused sparks of religious feelings, and reunified men with God. It would be an interesting idea, maybe, but I still believe that we are God’s highest creation, not because we have the most intelligent brain on the universe, but because He has created us as His image. So, what we need is to pay more attention to Him and others; we should not need extraterrestrial lives to make us more humane.

Although I did not enjoy the book as much as I have expected, I still think Contact is a good novel, and I must thank Sagan to remind me to think more about humanity.

This book is counted as:
4th book for 2014 TBR Pile Challenge
68th book for 1001 Books You Must Read Before You Die

Posted by Fanda Classiclit at 7:21 AM No comments: