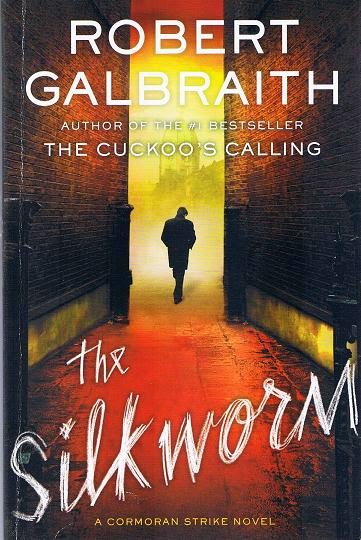 About one year after finishing The Cuckoo’s Calling, I was once again taken by Robert Galbraith to the office of C.B. Strike, the private detective. However, in contrast to the glittering show-biz aspect of a model’s murder in the first book, this time Galbraith took me to a grotesque macabre atmosphere of a writer’s mysterious death.

One day in his fatigue and lack-of-sleep condition, Cormoran has made a rush decision. He has dumped a rich potential but arrogant client to make way to a poor afflicted woman. Eleanor Quine asked his help to find his missing husband, a writer Owen Quine, and to bring him home. Quine was missing right after finishing his latest novel, which he boasted as his masterpiece: Bombyx Mori (the Latin words for ‘silkworm’). The manuscript has been spreading all over the town before Quine’s agent, Elizabeth Tassel, realized that many literary key people were pen-portrayed in this mythical-gothic thriller, including Tassel herself, an editor, a publisher, and Quine’s girlfriend (a writer); an element which stirred anger and, in some, fear in the literary world.

Several days later Cormoran found Quine’s death body in an empty house, tied, disemboweled, and putrid. The murder was performed theatrically, neatly, and cold heartedly, that the Police had no other lead to take than suspecting Leonora Quine of killing her own husband. If Cormoran, at the murder of Quine, might regarded that his job to locate the writer was done, now he took personal responsibility to save the unjustly accused wife from being wrongly convicted. This is what I love about Rowling aka Gailbraith. Her story is not just about crime and detective, there is also a touch of humanity. Cormoran’s decision might not always be wise or logical for a detective, but that is what made him distinguished: he has heart. This single aspect warmed Rowling’s detective story, which is usually cold.

Cormoran and Robin’s personal struggles are also interesting. Although I feel the excessive passages about Cormoran’s ex-fiancé is wasteful and boring; it is interesting though to see how both Cormoran and Robin—logical and intelligent as they are—picked the wrong partners for themselves. We can easily see that Charlotte and Matthew are selfish and narrow-minded people who could never understand Cormoran and Robin. But still, our detective and his assistant love them blindly. Well, maybe love is, sadly, blind indeed…. Particularly for Robin, I still don’t understand how a clever and sensible girl like her could have liked a guy like Matthew. Sometimes, girls can be so foolish when it comes to boys. *sigh*

Compared to The Cuckoo’s Calling, this one is less engaging. The idea is brilliant (but very ‘Rowling’, in her fondness of mythical elements), but it lacks the grotesque atmosphere around the murder. It feels more like a staged act than grotesque. I liked the idea of hiding parts of Cormoran’s actions when we were approaching the climax (and left us in the dark of what was actually happening), which was a bit like Agatha Christie’s; it made us groping and curious, which added the mystery. And I also liked how Cormoran’s and Robin’s relationship developed further; she proved herself capable of being Cormoran’s assistant. And of course, with Cormoran’s lack of physical fitness, their collaboration would be much more interesting in the next series. But apart from those aspects, the crime story itself is not prominent.

Three and a half stars for The Silkworm.

Posted by Fanda Classiclit at 7:30 AM 4 comments: