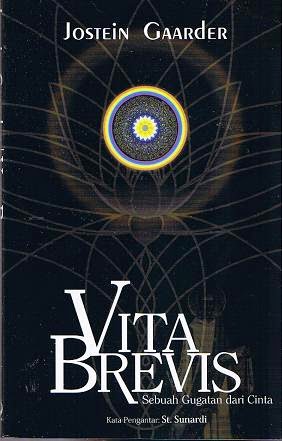 In one of his trips in 1995, Jostein Gaarder accidentally found an old manuscript in a secondhand bookshop in Buenos Aires. It was a letter in Latin from a woman signed herself as Floria Aemilia, addressed to Aurelius Augustinus, Bishop of Hippo. Gaarder bought it, and after examining it, became strongly believed (although no authority could yet confirm) that it was being originally written by St. Augustine’s mistress, whose identity he has concealed in The Confessions, but Augustine did mentioned the woman as his mistress quite a lot. I read this book right after finishing The Confessions, in order to judge it more contextually. My copy (translated to Bahasa Indonesia) contains only 150 pages, yet it was a thought-provoking reading.

Floria was an intellectual woman; she met Augustine for the first time when they were both pupils in rhetoric school. And through her letter, she quoted a lot from great philosophers like Cicero or Horace. The main purpose of the letter was to criticize Augustine for abandoning her for God, and to question his thoughts in The Confessions which she happened to read, perhaps not long after it was published. For some people, Vita Brevis—the Latin words of ‘Life is Short’—was perhaps a touching love story of an abandoned woman, but I regarded it as a mere ungrounded jealousy of a woman who could not accept being defeated by a “philosophy”. She bitterly and desperately wanted to tell the world that Augustine was all wrong.

I felt sorry for Floria because, though she was intellectual, she was so selfish and narrow-minded that she could not see beyond herself. She kept accusing Monica (Augustine’s mother, the Saint) for breaking their relationship to make way to Augustine’s marriage with a young girl. Well, dear Floria, think about this, by whatever standard you valued yourself, you were just a mistress, never Augustine’s legal wife. So how could you claim your rights to own him? Any mother who is intimate with God would react the same as Monica to any woman who seduces her son to live in sin. Then you criticized Augustine’s struggles to purify himself by staying away from earthly beauty as blasphemy to God. It only proved your ignorance and narrow-mindedness. Why couldn’t you be happy that your beloved man was reaching towards his real call, which is God? Why couldn’t you just support what he was fighting for? If you loved him as much as you kept boasting, you should! Instead of asking the same question over and over again: “Do you remember how sweet our love was, Aurel?”

And in the attempt to pour your anger to your Aurel, perhaps, you have done just the same thing as you criticized Augustine for. You accused him of cutting the whole context of bible text: 1Cor. But in the attempt, you yourself cut the whole context of Augustine’s Confessions. It was only proof that you could not really understand the deeper meanings of Confessions. Well, for that I could not scold you, because this whole thing is just about two persons who have loved each other in the past, then one of them completely changed, while the other stayed the same. Thus there lied a wide gap that separated them, as wide as the gap between earthly and spiritually lives.

See? This book is for me more tiring than touching. I just can’t sympathize with women who think life is just about love, lust, and romance. It’s rather surprising, in Floria’s case, because she was a learned woman, and she was then even a catechumen. I can understand how hurt for her to be abandoned by the man she’d loved, but doesn’t it happen to many women? She criticized that God or the Catholic Church has acted injustice by hindering a man from loving a woman. But it does not apply to every man, only whom He calls, and Augustine was among them. And it’s not because men shouldn’t love women, if so, why then God created us as man and woman? It’s because, in this case, Augustine’s sexual passion over Floria has barred him from seeing the Light of God.

In the end, I was disappointed by this book. I have expected Floria as somehow in the same level with Augustine in theology and philosophy, as she has dared to answer the Bishop’s Confessions. Or at least, I have expected a bit about feminism. But in the end, it’s just about the rage of a woman over romances problem.

I guess two and a half stars are even too good for Floria, but at least it made me understand and appreciate The Confessions more than my original reading of it.

This book is counted as:

2nd book for Lucky No. 15 Reading Challenge: Bargain All the Way

Posted by Fanda Classiclit at 4:47 PM No comments: