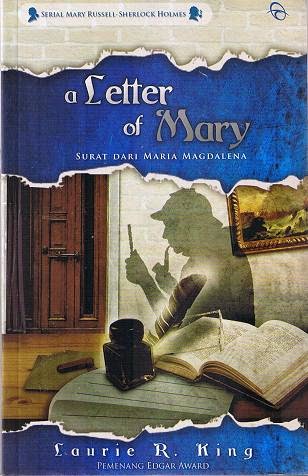 What would you think if you have lived in London in the 1920s, and heard news that the famous retired detective Sherlock Holmes has just married? ‘Awkward’ would be the first word pop up in my head. But interestingly, in A Letter of Mary, King has written it such that it seems normal—interesting but normal.

A female archeologist, Russell’s friend, visited the Holmes’ residence, and placed a small box containing an old papyrus under Russell’s care. It is believed to be a letter from the first century written by Mary Magdalene. Yep, it’s THE Mary Magdalene, the Saint. Few days later the Holmes found out that Ms. Ruskin has died in a hit-and-run accident in London. It turned out, of course, to be a murder. King develops several leads of suspects, including a sexist colonel who was disappointed that the archeologist he was about to sponsor was a woman; a Palestinian man who have visited Ruskin; and her nephew who would have had benefit from her death. Then a group of men ransacked Holmes and Russell’s house, and most probably wanted to get to the old papyrus. So Russell translated it (originally written in Hebrew), and found in it that Mary Magdalene has called herself the apostle of Jesus, which, if the letter was published in today’s world, would have huge impact, both historically and theologically.

[spoiler] Actually, the papyrus would have been an interesting point to dig on, and I have imagined some journeys to the east, tracing over historical facts, etc; but apparently King had another plan. In the end, it was just a usual lust-of-money kind of crime. [spoiler end] Again, there is the feminist theme all over the book (Mary Magdalene as Jesus’ apostle, Dorothy Ruskin the female archeologist among her male colleagues, and the misogyny Colonel and his son). However, concerning our detectives, King made Holmes won over Russell in solving this mystery. Maybe it was meant to be a balancing aspect against the feminism topic? And what about Russell’s feeling over the Colonel, considering his misogyny ideas? I think here in this story, Russell has fully grown up as a woman—she sees feminism not only as ideology, but the way a woman sees her opposite sex.

Speaking about feminism, one of the most interesting parts of this third book of Mary Russell-Holmes series is Russell-Holmes relationship—now as husband and wife. Russell said to Holmes that she thought they are not a romantic couple. But I disagree; I think they are romantic…in their own way. I think romantic isn’t about flowers, candle-lit dinner, etc. Romantic is when you know details about your partners; their habits, their likes and dislikes, their feelings and reaction over something; things you only share with your partners. And above all, they respect each other. Russell and Holmes are like this. I think the marriage life of two genius detectives with acute pride and high ego would be just like Russell and Holmes’s.

And sometimes there are indeed several ‘romantic’ scenes throughout the story. My favorite is when Holmes must leave Russell to her undercover at the Colonel’s house; and at the door before he left, he stopped, looked at Russell with unread expression, and said: “I feels like Abraham…”. This he refers to Abraham, when he took his family to Egypt, and told Sarah—his beautiful wife—to lie to Pharaoh that she was his sister, lest Pharaoh will kill him to take her as his wife. Isn’t it sweet? Or when Holmes confessed to Russell that now his heart controlled his mind (he was worried about Russell); to me that’s romantic—romantic in Sherlock Holmes style! :)

In short, this book might be my other favorite so far from the series, besides The Beekeeper Apprentice. Now, I can’t wait to read the fourth book, The Moor, which was set in Dartmoor, the setting of Doyle’s The Hound of the Baskervilles. Super interesting, eh? ;)

Four stars for A Letter of Mary, I liked and enjoyed the whole story. It’s been an oasis during the hectic month of December!

Posted by Fanda Classiclit at 1:26 PM