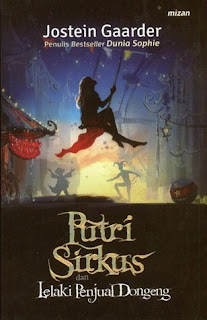 I would say it again… Jostein Gaarder is the master of storytelling! Not only that he crafted a puzzling frame story for this book, but he also “deceived” us on the title. The Ringmaster’s Daughter is NOT at all about the daughter of a circus owner—which for some years made me mistaking this book as a bit childish. It is far away from childish. The Ringmaster’s Daughter is about how traumatic childhood experience can hugely change someone’s life.

Petter “The Spider” was leaving a book expo in haste because he thought his life was in danger. So, we know that he is a bookish man, who has done something that makes other literary people from the expo wanting to kill him. After he arrived safely at a secluded hotel, he forced himself to write his story—as usual with Gaarder: story within story.

Little Petter lived with his mother—his dad has left the house—and he had a unique ability to create stories from…well…everything! His brain is hyperactive, and he couldn’t stop it from inventing plots of stories. Connecting that with the book expo, he should be an over-productive writer, right? But no, Petter doesn’t like to be famous, and he don’t have patience to write novels. He just created plots—a lot of them! Later when his mother died, and he was on his own, he founded Writers Aid, a corporation that helps writers around the world get brilliant plots for their next novels. Suddenly Norway—where The Spider lives—was flooded with new novels; not only that, literary world suddenly getting a booming; all because of this one man, the ghostwriter, Petter. Oh and he got rich from it. But then... as in all things that are built over falsity, the bubble is threatening to blow out.

From there I know there’s something wrong with Petter, but what? And what about the little man with green hat who at first dwells inside Petter’s head, but then becomes real although only Petter can see him? And of course there’s Panina Manina the ringmaster’s daughter who didn’t know his father until it’s too late, which seems to be Petter’s favorite story. Not until the end though, did I get the meaning of them all. Here’s a spoiler…. Petter turns out to have traumatic experience when he’s a kid. Right after that he likes to have those active thinking. It’s just his mechanism to shut his brain from remembering the traumatic thing. So I guess the little man with green hat is his consciousness. At first he’s just a boy with active imagination, and so the little man only appears inside his imagery world. But when he’s grown up and brings the imagery world into reality (Writer’s Aid), the little man too must do his job in the real world. Mystery solved!

As always, Gaarder crafted the story amazingly. I also loved the plots and stories created by Petter. Hey, it feels like reading Italo Calvino’s If a Traveler’s…. stories in a story! Two things that I just realized after reading this are: our existence in the universe (Gaarder taught philosophy for high school anyway), and his love of oranges. Yeah… I think I read about oranges in several of Gaarder’s books; he must love oranges very much! J

For all that…. Four stars for The Ringmaster’s Daughter.

Posted by Fanda Classiclit at 4:31 PM